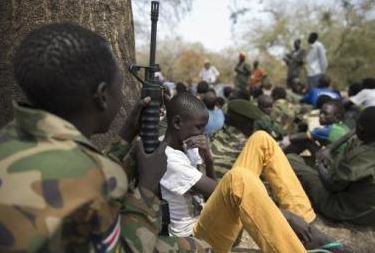 JPEG – 18.5 kb
Child soldiers sit with their rifles at a ceremony held on 10 February 2015 as part of a disarmament campaign overseen by UNICEF and partners in Pibor (AFP)

The agency, in a new report it released, said children in the young nation are some of the most disadvantaged globally.

The report was unveiled as part of UNICEF’s commemoration of the 30th anniversary and looks at undeniable achievements of the past three decades globally.

The report, entitled, “Child at a Crossroads” also noted that South Sudan has one of the highest child mortality rates in the whole world, with one in 10 children dying before five year, due to preventable diseases and poor health care.

“Despite the many challenges children are facing in South Sudan, UNICEF remains positive and optimistic on behalf of the children in the country,” observed Mohamed Ag Ayoya, the UNICEF Representative in South Sudan.

“The report UNICEF is launching today has a clear message; if there is a will there is a way to change children’s futures. I know there is will among the Government officials, UN agencies and partners, now, let’s find the way,” he added.

South Sudan, the report says, continues to have one of the highest child mortality rates in the world with one in 10 dying before five, mostly due to preventable causes, lack of health care, poor hygiene practices and access to clean water.

According to UNICEF, Children in South Sudan are suffering from abuse and exploitation related to social norms, harmful practices and insecurity, with an estimated 45% of all women married before 18, placing South Sudan as one of the nations with highest prevalence of early marriage in the world.

Meanwhile, to accelerate progress in advancing child rights and address stagnation and backsliding in some of these rights, the report calls for more data and evidence; scaling up proven solutions and interventions; expanding resources; involving young people in co-creating solutions; and applying principles of equity and gender equality in programming.