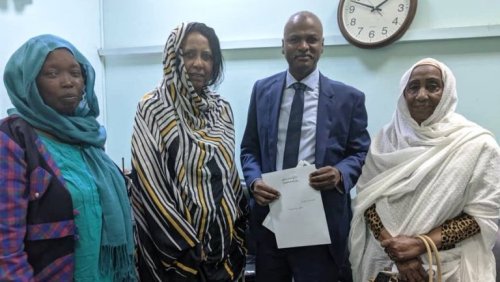 January 2, 2019 (KHARTOUM) – Thousands of women took to the streets of Khartoum calling for gender equality and the ratification of an international convention for women rights.

Sudanese women participated massively in the four-month protests that led to the collapse of the former president Omer al-Bashir whose Islamist regime oppressed women and confiscated their rights.

Sudan is one of only three countries (Iran, Somalia, Sudan) that has not ratified the Convention on the Elimination of All Forms of Discrimination against Women (CEDAW).

The demonstrators held national flags and banners calling for gender equality some of it read “The whole world except us. You ashamed us”.

The demonstrators marched to the office of Prime Minister Abdallah Hamdok where a women delegation handed over a letter co-signed by 46 civil society groups and 13 political parties calling for signing and ratification of CEDAW.

The letter seen by Sudan Tribune urges the government to sign and ratify the CEDAW during the transitional period to spare the coming generation of women falling again into “the clutches of repression, hardship, injustice, terrorism and exploitation”.

“We strongly believe that the international legal framework will provide a legislative umbrella for the protection of women, in their diverse backgrounds, and will allow them to effectively participate in public life in a way that ensures justice and equity,” further stressed the signatories.

However, women’s rights campaigners say they are not fairly represented in the government where they are only four women of 18 ministers.

They pointed to a recent list of nominees for governors saying it does not include a single woman.

But, the most important of them remain laws to protect women of female genital mutilation (FGM) and child marriage. Also, they raise child marriage as the Islamic personal status laws allow girls to be married once they hit puberty or, at the age of 10, with a judge’s permission.

“These policies are demonstrated in the personal status laws, in the discrimination embedded in laws pertaining to work and freedom of movement, in the policies related to citizenship and records of births and deaths, in the health and economic policies, in the enrolment practices (…), and other discriminatory policies inherent in the structure of Sudanese state, which are still in force to this day,” said the letter.